According to the first minutes taken from a meeting in June 22, 1955:
“This meeting was called to order by Mr. Zetterberg Master of the Fieldbrook Grange.  A report was givenby Jess Luster for the committee that visited Blue Lake Fire Department. It was reported it would cost$1.05 per hundred in taxes to join Blue Lake.  We would gain no more protection than now.  We might get some equipment here after their present equipment is paid for. It was Mr. Luster’s opinion we should be able to get a truck and equipment locally for $1000 or so and no more taxes.
Mr. Zetterberg reported that Arcata does not want us affiliated with them because it is too far away.  Mr. McCready reported that Arcata has a 1933 Chevy truck, pump with a Chrysler motor, hose and equipment already to go for $500. Arrangements for payments can be made if a Fire Department is established.  Arcata would be duty bound to come up here under mutual assistance.
It was suggested we go to Westhaven for help as they have a set up similar to what we need here.
Mrs. Daugherty reported they have a motor and can get a pump that could be mounted on a trailer. Mr. Daugherty’s labor is to be donated.
Nominations for temporary officers were made:
Fire Chief – Douglas Mc Cready
Assistant Chief – Bill Hiscox
Secretary- Velda Mc Cready
Treasurer- Doreen Hiscox

Mr. Marton and Mr. Thomson were appointed to go over the truck for sale.
The officers as a committee are to visit Westhaven for assistance in organizing. Next meeting to be called when reports are in.
The meeting was adjourned.
Velda Mc Cready
Temp.  Secretary.”
This is how the Fieldbrook Fire Department began.

In the beginning there was no Fire Hall so the truck was parked at Fire Chief Doug McCready’s house. The first siren was donated by Tony Bobillot and placed across from Doug McCready’s house.  Later, a larger one was put on a tower at the Fieldbrook Market. The Fire Department purchased a 1947 Chevy truck and it was parked in the Bobbillot garage as it did not fit in the Fire Chief’s garage.When the new school was built in 1961 all fire meetings were held there.

In May 1966, the land for the present day Fire Department was purchased.  The first meeting was heldvthere in November 1967.  The original fire hall was slightly different than it is today.  The building first had two bays and the community service office and bathroom were located on the north side, presently the bay where 8747 is located. Sometime during the 80’s an addition was added to the south side of the building. The addition included a new bay for a larger water tender, a community service office, a kitchen, and bathrooms. The back of the fire hall was added on for a space for turnouts and storage. 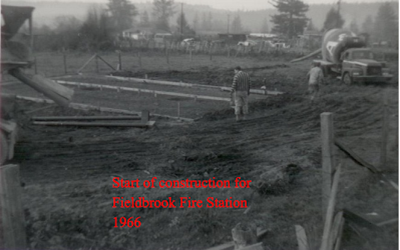 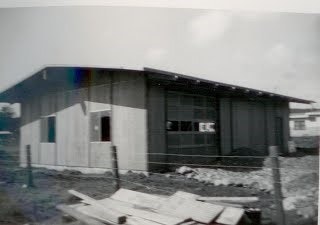 The fire hall originally had a siren on the roof.  The siren was enormous and slowly wound up to speed which sent a constant groan throughout the Fieldbrook valley.  The original dispatch of an emergency started by a phone call that went to designated phones, which were typically at the fire chief’s home(Night time calls), and the Fieldbrook Market (Day time calls).  Depending on the time of day, either the owners of the market or the chief would race to the fire house and sound the siren. The siren was originally the main way of alerting volunteer firefighters of an emergency.  As the fire department grew, members were issued a monitor that sat in their home. The sheriff’s department (Control 8) dispatched calls to the monitors.  During the 90’s the siren was replaced with the present siren that is mounted on a tower. Also at that time, a system was installed that automatically opened the doors.  The dispatch was moved from the sheriff’s department to Cal Fire (CDF) Fortuna and monitors were replaced by pagers.

Every Fire Department needs a Fire Chief to be in charge of the organization.  Fieldbrook has been fortunate to have these individuals who have stepped up to the plate to run the department and spend the extra time that it takes to keep it running and keep the community safe: 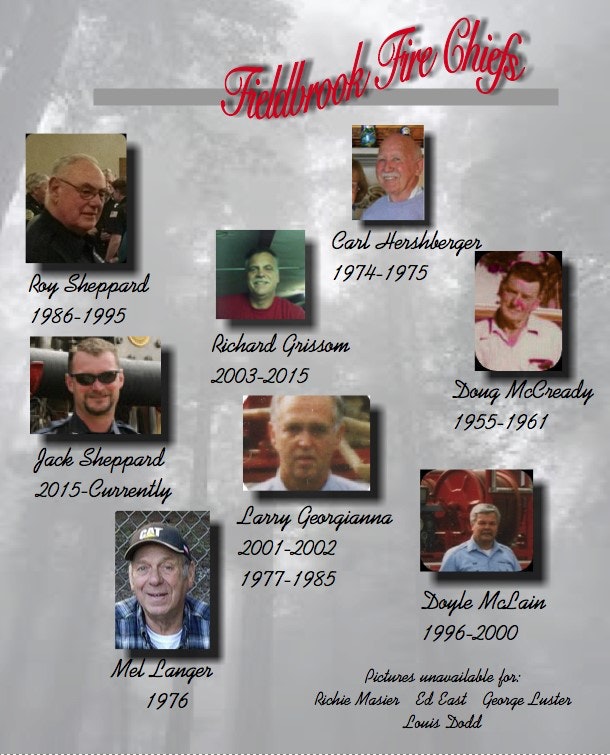 Fire Department.  As the town of Fieldbrook grew in size, the need for a better fire truck also increased,

as is evidenced by this letter from Helen Mason to the state of California.

At our last regular fire meeting I was asked to write you a letter asking if you can help us get a truck through civil defense. Our truck is a 1930 Chevy with mechanical brakes that won’t stop the truck if you go to a fire like you should in a hurry.  We crawl to and from a fire. The tires are very bad, usually a flat dual.

Our fire department consists of about half women.  Most of the time the men are away all day and we have to go out on a call. We do not have the money to go out and buy a fancy truck. All we want is a safe usable one that we can mount our motor and tank on.

The numbers of Fire Trucks that have protected our town of Fieldbrook have gone from one engine with a 300-gallon tank to four engines with a total of 4800 gallons of water!  The fire trucks that have been in service are categorized as an attack (first responding truck), water tender (holding a large quantity of water),or pumper (fire engine that has water and a large pump).  Following is a list of fire trucks that have served the Fieldbrook Valley:

In the early stages of Fire Department, community members donated money to buy the first fire truck.As the Fire Department grew in members, insurance needed to be purchased for the members. Also, members paid for the maintenance and fuel for the fire truck. There was a very active woman’s auxiliarycalled the Smokettes. The Smokettes were Fieldbrook’s daytime fire protection since most of the men wereat work.

They also raised money to keep the fire department going through fundraisers such as:Selling fire extinguishers, a grab bag sold at the store and gas station, collected and sold aluminum cans, raffles. The Firemen’s Dance was another fund raiser.  The dance’s were held once a year at the Fieldbrook Grange and were known to be quite the party.  This fund raiser brought in money for the fire department, however the sheriff was having to show up to break up fights which finally brought the dance to an end. Other fundraising that has taken place are rummage sales, grange breakfasts, firewood sales, and even fireworks during the fourth July. One of the fundraisers that has been around for awhile in the annual is the chili dinner. The dinner was originally a stew dinner and was later changed to a chili dinner. The annual chili dinner not only raises money for the department,  it also gives the department an opportunity to update mapping, and meet with he community. During the mid 80’s the first Tax Assessment was voted in by the community was the first major source of funding to keep the fire department  running  as a branch of the Fieldbrook Community Services District.